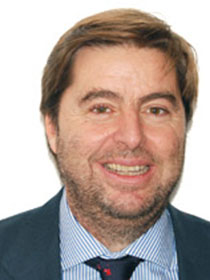 In 1987 he began his professional career in the British group TDG, where he held several positions in UK and France. After that he was responsible for TDG's expansion in the Iberian Peninsula. In Spain he held the position of Managing Director for 3 years.

In 1997 he left the group to focus on the retail furniture market and he currently owns one of the best known décor firms in Spain.

He joined GAULLAR in 2009 and has actively participated in many international projects including those of GAULLAR Brasil.